Edit
watch 01:36
We're Getting Mutants in the MCU - The Loop
Do you like this video?
Play Sound

Kiyomi Sakura (紗倉 清美, Sakura Kiyomi) is a middle-school girl who Ika Musume makes friends with after a prank gone wrong. She is the first person who Ika officially makes friends with, and they soon become quite close.

Kiyomi is kind and gentle towards everyone she meets, including Sanae Nagatsuki who had initially viewed Kiyomi as a rival for Ika's affection. As the leader of a baseball team (anime) / badminton team (manga), Kiyomi also shows leadership qualities. For example, though she was never leader of the Invasion Club, its other members soon realize Kiyomi keeps the club together.

Kiyomi's kind exterior supposedly masks insecurities in other areas, such as her lack of bust compared to her friends.

Kiyomi is the first character in the series to regularly wear glasses, even while playing sport. While she sometimes appears in a bikini in promotional content, her swimwear as seen in both seasons of the show proper is a navy one-piece swimsuit.

Kiyomi with the rest of the characters. 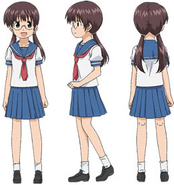 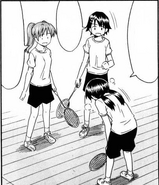