Kozue Tanabe (田辺 梢, Tanabe Kozue) is a minor character who first appeared in Isn't This Still A Crisis?.

Kozue Tanabe appears to be the same age as Ika Musume and Kiyomi Sakura. She wears a red dress, which coincidentally, is similar to that of Ika Musume's dress. It is implied that she also comes from the sea, as she has a hat similar to Ika's and makes statements that indicate she isn't human.

So far she has appeared in two episodes.The first episode she appeared was Isn't This Still a Crisis. She talked to Ika Musume, telling her that invading might not be the best thing to do as not all humans are bad. The second episode she made an appearance in was Ink That A Festival, in which she points to Eiko the direction of the lost Ika Musume. She is later seen in the end credits of the same episode. It is indicated that she might be an octopus. 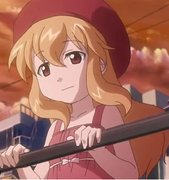 Add a photo to this gallery
Retrieved from "https://shinryakuikamusume.fandom.com/wiki/Kozue_Tanabe?oldid=5828"
Community content is available under CC-BY-SA unless otherwise noted.