Nagisa is introduced as the fourth employee of the Lemon Beach House. She greatly fears Ika, and sees her as a genuine threat to humanity. As much as she warns the others, though, nobody else feels the same way.

Nagisa has an older sister, Aiko Saitō, whose debut appearance in the manga actually predates that of Nagisa's (unlike in the anime). Nagisa is also a high-schooler, but does not attend the same high school as that of Eiko Aizawa and Sanae Nagatsuki. Her two friends, Koike and Yamada, debut in Chapter 340 and visit the Lemon Beach House for the first time in Chapter 364.

In addition to being a keen surfer, Nagisa also rides a bike and can jump rope. Nagisa also likes watching magical girl and tokusatsu shows on TV in her spare time.

Ika enjoys the fact that Nagisa fears her and constantly teases her whenever she can. For a short period, Nagisa started dressing up as a guy in order to attract female customers and stop Ika from teasing her, but she gave up after assuming she needs to be the one who recognizes Ika as an invader. She also, at one point, decided that if she pretended to not fear her, Ika wouldn't find her a threat and get rid of her. This worked for awhile but once she had to shake Ika's hand, she just couldn't do it out of pure fear, and ran away. Nagisa sees Ika as a serious threat, and is very wary of her at times, even going as far as attacking her after Ika Musume hugged her.

Nagisa has tan skin, and short dark indigo/blue hair. She also has dark gray eyes. She is usually seen wearing the Lemon Beach House Uniform. Nagisa is of average height and she is very expressive.

Nagisa can disguise herself as a boy by simply combing her hair backwards.

Nagisa with the rest of the characters.

Nagisa and Cindy as figurines. 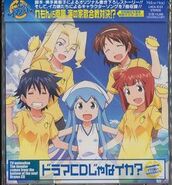 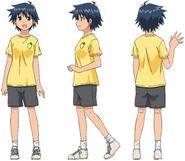 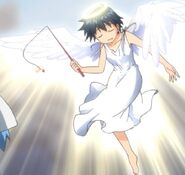 Nagisa as an angel, thought by Ika Musume.

Nagisa in a regular swimsuit as seen in Season 1, Episode 12 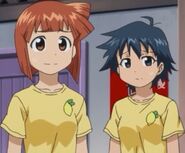 Nagisa as a male in Season 2 Episode 2. 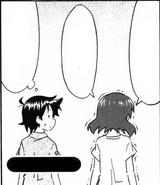 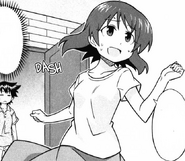 Aiko running after her students.

Nagisa Saitō's height compared to the others.
Community content is available under CC-BY-SA unless otherwise noted.
Advertisement